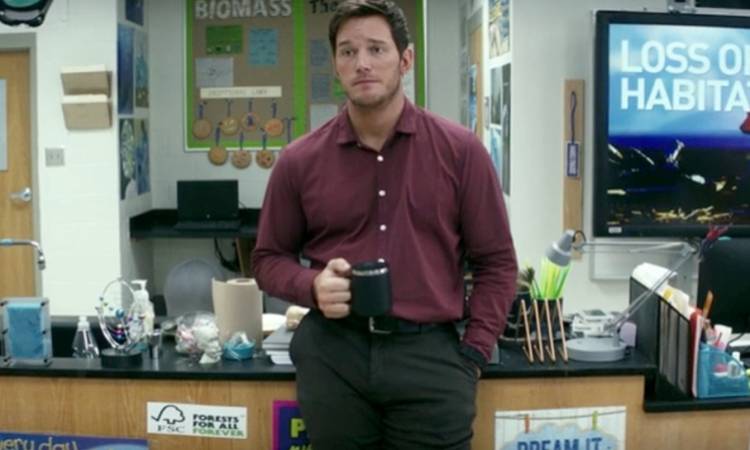 Believe it or not, the new Amazon Prime film “The Tomorrow War” highlights FSC. Chris Pratt plays hero Dan Forester, a military vet who becomes an environmentally focused high school science teacher. And if you watch, about 13 minutes in you’ll see that Dan’s desk prominently features the FSC logo and tagline.

This appearance was not a coincidence – in fact, it was more than a decade in the making.

About ten years ago, former FSC US Market Development Lead Ian Hanna struck up a conversation with Beth Bell, the founder and president of a then-new company called Green Product Placement.

Beth had founded Green Product Placement following a live chat on the inspirational “TED” website with documentarian Morgan Spurlock. After spending years on set dressing and decorating departments of feature films, Beth was familiar with product placement. Beth was inspired at the prospect of using this powerful and engaging marketing platform to make it easier for filmmakers, production designers, set decorators and prop people to find geographically correct, socially conscious, and truly “green” products for inclusion in their films.

Ian managed to explain FSC and its mission well enough to convince Beth to do what she could thereafter to work FSC into as many productions as she could.

In 2017, responsibility for working with GPP passed to Chris McLaren, FSC US Chief Marketing Officer. Since then, Chris and Beth have connected regularly to compare notes on environmental, social, and sustainability developments, as well as to consider upcoming TV and film projects for which FSC might be a good fit. While the process is never a sure thing because directors and producers have final say, since 2017, GPP has helped get the FSC brand placed into a few projects, including the North American TV show Treehouse Masters and the UK feature film Goosebumps.

We have an Immediate placement opportunity in a new Science Fiction film for Paramount.

I've read the script and the story is an edge of your seat action sci fi that will have you rooting for the "good guy" to save the world. The premise is that in current modern day, our hero, played by Chris Pratt, a High School science teacher, is married with a young daughter. The family is watching the World Cup when an army of heavily armed soldiers materializes on the field. They have traveled back in time to recruit soldiers to fight an alien menace that threatens the future of humanity.

The next year, world governments have begun sending forces to the future to fight in the war for earth. People are chosen in a draft, and the protagonist gets chosen to go. He travels to the future and a world very much in peril. There, he meets up with his daughter, who is an adult and now a scientist as well as a general.

Battles ensue, that don't bode well for the future of earth. Our hero ends up travelling back to modern day where he devises a plan to save future earth by acting in the present. There is also a slight undertone of a climate change precautionary tale.

There are several scenes that take place at the couple's modern day suburban home, including a scene where the fridge opens, and we see inside. We see the whole kitchen for a few scenes as well. Additionally, there are scenes in the High School science classroom, and "wall posters" have been called out- appropriate to conservation artwork and posters.

McLaren responded that FSC US was interested, and a conversation about which scene would work best for FSC quickly determined that the most compelling placement would be the science classroom. Chris then provided Beth with trademarked graphic assets (under license) which she could then present to the filmmakers for their consideration. In the ensuing months, Beth did the rest. In fact, FSC US only became aware that the placement had been successful when McLaren watched the movie with his family, saw FSC on the teacher’s desk, and realized that The Tomorrow War was in fact the movie Beth was referring to before it had an official title more than two years prior!

We are profoundly grateful to Beth, Ian and the filmmakers for their willingness to help drive awareness of FSC, and look forward to working with Green Product Placement to get FSC on the big (and little) screen more and more in years to come.