Wednesday, 27 July 2016
FSC International and US Boards convene in Charleston 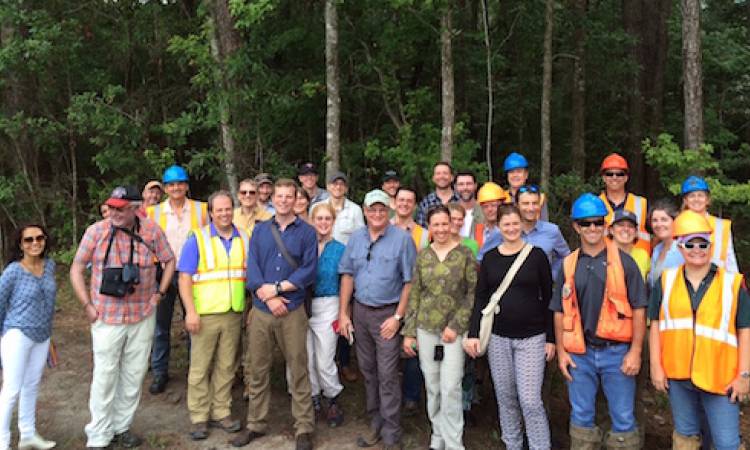 Last week, FSC International held its summer Board of Directors meeting in Charleston, South Carolina, including spending two days with the board and staff of FSC US. The International Board last visited the US in 2011 in San Francisco. Charleston was chosen to explore the opportunities and challenges FSC faces in the US South, particularly family woodland owners’ access to certification and markets. The combined boards also hosted a wide-ranging discussion with FSC stakeholders in the region, and met in joint session focusing on how to accelerate the implementation of FSC’s new Global Strategy in the US and around the globe.

On Monday July 18th, the combined boards and staff were treated to a forest tour by Randy White of White Wood Forest Management, one FSC’s growing number of family woodland group certificates in the region. White Wood is an important supplier to International Paper who organized the day’s field trip and provided the boards with an overview of Southern forestry and forest ecology.

The following day, the boards met in joint session covering topics such as Controlled Wood and what risk-based approaches to certification might look like in a more streamlined normative framework. FSC US staff shared its progress in a joint marketing initiative with World Wildlife Fund and several US manufacturers. The majority of the time, however, was spent discussing how FSC can transform itself to realize important ambitions from its Global Strategy approved last year. With this strategic framing, members discussed among other topics governance reform, standards and policy development, consumer marketing, and operational effectiveness.

The second day concluded with a stakeholder conversation that FSC International Board members found extremely informative. The session included many of FSC’s important producers in the region as well as NGO’s, certifying bodies, and group certificate managers. Participants gained insight into the many policy issues the International Board is working through and were able to provide direct perspectives on those issues, including Controlled Wood, International Labor Organization (ILO), combatting improper claims, and requirements for ending disassociation (e.g. APP and April).

FSC’s International Board officially opened its meeting on Wednesday morning and continued through Friday late afternoon. A public version of the minutes is expected sometime next week, and will likely include decisions on Controlled Wood, implementation of the Global Strategy, ILO, the default cutoff date for Intact Forest Landscapes (IFLs), and nominations to FSC’s Policy and Standards Committee. FSC US will include these minutes in our next newsletter and post them to our national Policy and Standards forum.

We greatly appreciate the opportunity to have hosted the FSC International Board and staff, and want to thank all of our US members, especially International Paper, who helped make the joint meetings and stakeholder discussion a success!